Alright so today is a two-fer. First of all I wanted you all to be aware of a nice little publication I became aware of this week from Constructech that deals with nothing but IT, BIM and Construction specifically.

Second thing, is some construction scheduling/sequencing and how it works with Innovaya (I'll do the NavisWorks tutorial at a later date).

For the most part if you are using Primavera products or Microsoft Project you are in the clear in regards to Innovaya. If you have some other proprietary scheduling software you might be in a pinch if it can't at least export to one of these programs. Hopefully I'll get the demo video up tomorrow so you all can take a gander at the interface and how the platform works.

WOW! Thanks to everyone for coming out to the colaborative lunch! What a great crowd! I am going to follow up this little note with a video showing how Innovaya works as I demostrated, yesterday I think i'll just continue making archives of the information we go over each week and post it here.

Thanks again for coming out and what great emails!
Posted by architect11 at 7:41 AM No comments:

Here's a nice little trick for finding Cut and Fill Volumes on a Site using Revit.

Revit Architecture can report cut and fill volumes on a site to aid in determining the costs of landscape modification during site development.

Revit Architecture reports the values by making a comparison between a surface from one phase and, from a later phase, another surface whose boundary lies within the earlier surface. For example, Revit Architecture can comparea toposurface created in Phase 1 and a toposurface created in Phase 2 that lies within the boundary of the surface from Phase 1.

When you select the later surface and click Properties, you see the following instance properties:

-> Net Cut/Fill value comes from subtracting the cut value from the fill value.
Posted by architect11 at 3:06 PM 2 comments:

Brads Heads Up for the day

Don't know how many of you all are headed to the national AIA convention in May, but here's a great two day forum that they will be having discussing BIM and IPD which is where this ship is headed.

Should be pretty good. Longer blog tomorrow on how to manage keynotes linked to spec numbers and/or how to identify and estimate from Revit using Innovaya on a TI project we got going on. Depends on how much coffee I have...
Posted by architect11 at 8:19 AM No comments:

This is a quick demo of section perspectives and how they help visually spell things out to an owner. We put this video together to explain the space we could recapture by moving a basement wall back 5' for potential meeting space. I gotta say this worked pretty well!

So I had an interview with Ed Goldberg from Boston about BIM and how construction companies are currently utilizing their BIM's and how they are interfacing both with the software they have and with the project team as a whole. I was kind of shocked to learn that fully "collaborative modeling" like our shop has set up isn't that common, in fact, it's rare.

I've been asked a couple of times why we do it differently, why we choose to do single / same model coordination. The reasons are simple, but ultimately BIM in and of itself is really only part of the greater pie.

Secondly, I know the opportunity for improved communication and growth is a real need. The opportunity in using a singular BIM forces the issue of communication and coordination. Just as your "forced" to model walls to exact dimensions, BIM pushes the team to collaborate and define, just where are those construction joints? how is this panel going to be constructed? what is the necessary aesthetic for a space? what is the owners program and can we design those spaces first?

What we've started to see, is yes it's the "harder way" to construct a BIM. And that's the point. The point is to make sure that everyone involved has access to input and share the same information regardless of the others undertanding of what that teammate might need.

When we start to see overlap and questions pop up of "Well how are we going to get the ductwork through that? etc..." is when we know we are in some way creating savings.
Posted by architect11 at 11:58 AM No comments: 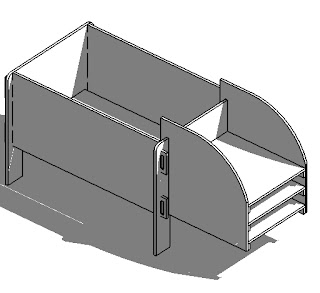 I don't know about you all, but I am dragging in a major way today. Maybe it could be because it is currently -1 degrees outside and my body got accustomed to watching soccer games on the couch over the break. Regardless the show must go on, so I'm going to post my first video tutorial tomorrow in anticipation of nothing blowing up or the file being so large no one can view it.

Thought I'd let every one know that I (my fiancee) will officially be bringing another life into the world come mid-July.

And yes I've already created a 3dBIM model of a crib design as attached. Still working on the design, but in the end this thing is going to be an elephant! After production, maybe I can post a video on MTV called "BIM Cribs." It's late.
Posted by architect11 at 2:00 PM No comments: